For the ninth consecutive year, BSPPH is part of the global campaign Get Breathless for PH. Throughout the month of May, we talked about the insidious ‘blue lips’ disease—pulmonary hypertension. 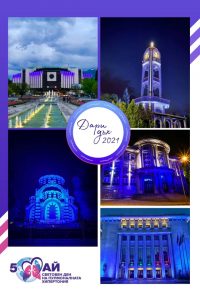 On May 5, 2021, from 7 PM to 11 PM, the building of the National Palace of Culture in Sofia was illuminated in blue, as a sign of sympathy with the patients who are struggling with the ‘blue lips’ disease—pulmonary hypertension. The most recognizable symptom of this rare disease is when the lips, hands and feet become bluish, which occurs due to lack of oxygen in the human body. Patron of the 2021 campaign Get Breathless for PH is the Mayor of the capital Yordanka Fandakova, who made a special video address to the participants in the campaign. The buildings of the Naval Forces Command in Varna, the Municipality in Burgas, Saint George the Victorious Chapel and Mausoleum in Pleven and the Bell Tower near the Monument of the Holy Mother of God in Haskovo were also illuminated in blue.

As part of the campaign, on May 15, during the sports event Get Breathless for PH, 20 sports enthusiasts donated their time to do an intense workout under the guidance of fitness coach Stefan Terziyski from BestEfficient. The event was hosted by the Spartak gym.

“I am happy that you play sports instead of those who cannot climb even a few stairs and live hidden from society”, said at the beginning of the sporting event Natalia Maeva, chairwoman of the patient organization, who is with organ transplantation as well.

A special guest of the event was the actor Filip Bukov, who played the role of the charming urologist Dr. Hadzhihristev in the Stolen Life series. Philip Bukov is an avid athlete with various sports talents, and he spoke about the initiative in a live broadcast on the Wake Up show on Nova TV.

The world vice-champion in wrestling Kiril Milov also congratulated the participants: “With this disease every step is a hardship. For every patient, every breath is a gift, and this disease is discovered late and it is important to talk about it”.

The sports event Get Breathless for PH took place in the form of high-intensity interval training, which in addition to increasing the heart rate, helps increase the levels of some key human hormones, which in turn creates conditions for burning fat and developing muscle mass. During part of such a workout, the heart rate rises to 85–90%, and the metabolism remains active for hours after the end of the workout.

Actor Ivaylo Zahariev also supported our Give Breath initiative with a video message in which he and his wonderful kids talk about pulmonary hypertension.

Despite the efforts of the patient organization, the National Health Insurance Fund continues to not fund oxygen devices for patients with pulmonary hypertension. Most of the patients in functional classes III and IV of the disease need expensive intravenous therapy, which is also not available in our country. For them, lung transplantation is life-saving—a problem that has been unsolvable in our country for years.